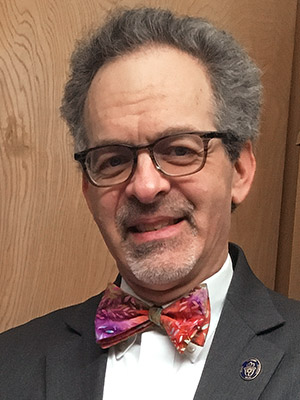 Rabbi Bruce J. Pfeffer was born in the Bronx, New York; grew up in Glen Ridge, New Jersey; attended the University of Bridgeport, in Connecticut; was graduated (1986) and worked as an Industrial Engineer. He went back to school; was ordained rabbi at Hebrew Union College-Jewish Institute of Religion in Cincinnati, Ohio (2000); and earned the qualification of Board-Certified Chaplain (2007). He currently works as chaplain at IU Health, Indianapolis, Indiana.

In addition to his chaplaincy work, Rabbi Pfeffer leads congregations in prayer and teaches religious school. He was convening chair of the Indiana Board of Rabbis (2011) and gave the Hebrew Testament Reading at the Indiana Leadership Prayer Breakfast (2015): he currently serves on the Breakfast’s steering committee. Additionally, he has served on the Conference on Ministry with the Aging (Southern Indiana) Committee (2011-2017).

He is past vice-president of the Marion County Master Gardener Association, where he learned to be a volunteer auctioneer. He is a baker of bread, maker of yogurt, and student (and sometimes teacher) of crochet, origami, haiku and bookbinding.